Posted at 09:44h in experts articles by Anne-Caroline Bernard

Today, concerns are emerging about the global data giants, the black gold of the digital age. These titans – Alphabet (Google’s holding company), Amazon, Apple, Facebook and Microsoft (GAFA) – seem invincible. These are the top five companies in terms of market capitalization. Their results are growing at an exponential rate : together, they have accumulated more than $25 billion in net income in one quarter.

“Resource scarcity in the economic sense of the term expresses the fact that resources are produced in limited quantities”. About a century ago, the resource in question was oil.

Amazon captures half of the money spent online in the United States. And Google and Facebook accounted for almost all of the growth in online advertising revenue in the United States last year. In itself, the size of a company is not a crime. The success of these giants has benefited consumers because few would want to live without the Google search engine, Amazon’s 24-hour delivery or Facebook’s news feed.

But there are reasons to be concerned. The control that digital companies have over data gives them immense power. Traditional approaches to competition, developed in the oil age, seem obsolete in what is now called the “data economy”. This requires a new approach. 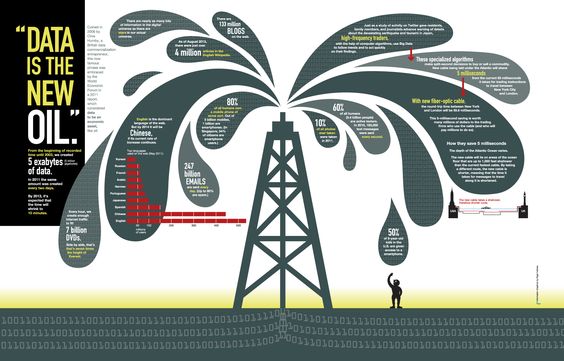 Smartphones and the Internet have made data abundant, ubiquitous and valuable. Whether you are jogging, watching television or simply stuck in traffic jams, any activity potentially creates a digital trace, and therefore more raw material for data refineries. While our devices and machines, from watches to cars or mattresses, connect to the Internet, the volume is increasing : according to some estimates, an autonomous vehicle will soon generate 100 gigabits per second.

At the same time, artificial intelligence (AI) techniques such as machine learning are able to extract more and more information from the data. Algorithms can predict when a consumer is ready to buy, when a reactor needs maintenance or when a person is at risk of becoming ill. Industrial giants such as General Electric or Siemens are now selling themselves as data companies.

This accumulation of data changes the nature of competition. Digital giants have always benefited from network effects : the more Facebook users there are, the more interesting the registration becomes for others.

For example, the more data Tesla collects from its autonomous vehicles, the better the company is able to improve autonomous driving : this is part of the reason why the company, which sold only 25,000 cars in the first quarter of this year, is now worth more than General Motors, which sold 2,3 million. Large datasets can thus act as a protective shield.

But access to data also protects companies from their rivals in other ways.

The giants’ surveillance systems are scrutinizing the entire economy : Google can see what people are looking for, Facebook what they share, Amazon what they buy. These companies own application stores and operating systems, and lease computing power to start-ups.

They have a “divine point of view”, overhanging the activities of their own market, and beyond. They can identify a new product that is on the rise, in order to copy it or simply to buy the newcomer before he or she becomes too important a threat.

Many observers estimate that Facebook’s $22 billion takeover of the Whatsapp email application, which had fewer than 60 employees, falls into this category of “acquisitions-eliminations” to get rid of potential competitors. By providing entry barriers and early warning systems, data can stifle competition.

Working with data’s help, not against them

First, competition regulators must move from the industrial era to the 21st century. When faced with a merger, for example, they traditionally rely on the size of companies to decide when to intervene. They must now take into account the extent of data assets to assess the impact of consolidation.

The purchase price can also be a signal that a well-established company is buying up a threatening young competitor. In this regard, Facebook’s willingness to pay such a sum to buy Whatsapp, which could not claim any income, could have been a wake-up call. Regulators also need to improve their data expertise in market dynamics analysis, for example by using simulations to identify automatic pricing algorithms that organize illegal price fixing, or to determine how to better promote free competition.

The second principle is to reduce the control that online service companies have over data, and to give more control to their suppliers. More transparency would be a good thing: companies could be forced to disclose to consumers what information they hold about them and the revenues they generate from them.

Governments could encourage the emergence of new services by further opening their own data or by managing some essential fields of the data economy as a public infrastructure, as India is doing with its digital identity system, Aadhaar. They could also make it mandatory to share certain types of data, with the agreement of users: this is an approach that Europe has chosen in financial services by requiring banks to make their customers’ data accessible to third parties.

You have successfully subscribed to the newsletter

There was an error while trying to send your request. Please try again.